25 May Dan Abrams on Etan Patz 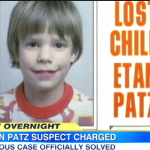 Dan appeared on Good Morning America today to discuss the confession of Pedro Hernandez, a 51-year-old man from Maple Shade, NJ, in the case of missing child Etan Patz.Patz disappeared in Soho, NYC in 1979 but the case was re-opened in 2010. On Wednesday, two days before the anniversary of his disappearance, Hernandez came forward, admitting to strangling and killing Patz. Dan discusses why the police were skeptical of this confession and what will happen going forward. “Think about it; first of all, you’ve got someone who’s been found responsible in a civil case in 2004, you’ve got them digging in someone else’s basement, and now a third person comes up as a possible suspect, you’ve got to understand why some investigators are going to be suspicious,” says Dan. However, Dan points out objective facts about Hernandez: relatives making claims, and his residence at the time of the murder. This, combined with what is believed to be a truthful confession, explains why police are moving forward, Dan argues. Yet to be seen is whether he pleas guilty, the testimony of families, and any evidence that can be found. Watch the full video here.