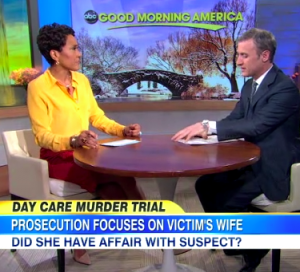 Dan Abrams appeared on Good Morning America again to give an update on the continuing trial for Hemy Neuman, charged with the murder of Rusty Sneiderman. The Prosecution closes on a note with what Dan calls “a very strong case.”  They established that Neuman wore a disguise, tried to cover his tracks, lied to the authorities – all of which lends to the notion that Neuman understood that what he was doing was wrong. Neuman is pleading guilty; It’s the insanity defense that’s “really, really hard to win,” Dan says, and it’s now the burden of the Defense to prove that he did not understand what he was doing. Acknowledging that juries are very reluctant to accept that someone didn’t know right from wrong, Dan seems to say the Defense has its work cut out for them. Watch Dan Abrams’ full discussion here.