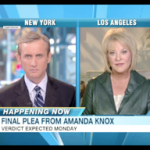 Dan has been covering Dr. Conrad Murray’s trial in Los Angeles for ABC. Murray is being charged after his patient Michael Jackson died in 2009, possibly due to the effects of drugs prescribed and administered to him by Murray. The trial is still ongoing, and Dan has been on hand to untangle the various legal issues that surround it. You can read Mediaite’s coverage of his appearances here, here, and here. You can also see him hash it out with Nancy Grace here.