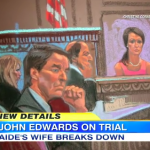 Dan Abrams appeared again on Good Morning America to discuss John Edwards’ trial, this time, on the Monday’s testimony from Cheri Young, Andrew Young’s wife. Dan had previously said that her taking the stand was basically a chance to bolster her husband’s credibility. “She’s doing a good job with regard to the big picture, which is ‘how did they get into this? how did this start?’ All of that is consistent with what Andrew Young has said.” Dan also points to the two key questions for this trial – the first, did John Edwards know about the money; the second, what was the money for, and was it designed to cover up the affair or to help his campaign? To the first question, Cheri Young is very helpful to the prosecution, according to Dan. She’s “a little bit divided [on the second]. On the one hand she’s saying Edwards said to her ‘Elizabeth can’t find out about this’, but throughout her testimony she’s talking about the political spectre. The reason that she and Andrew Young did this was for politics. The reason the money (in her mind) was coming in was to protect his campaign.” Watch Dan Abrams and the full discussion here.