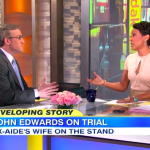 In the continuing discussion of the John Edwards Trial, Dan Abrams appeared on Good Morning America earlier this week to discuss the somewhat sensational coverage of Andrew Young’s testimony. Young’s wife (expected to testify next) said her husband was “mesmerized by Edwards when they first met.” Now, having learned of several major holes in Young’s credibility, Dan talks about how much the defense has to work with, and what they’ve done with their cross examination of the presidential candidate’s former aide. “This wasn’t just a cross examination, this was almost a verbal assassination. At one point [the lawyer refers to Young] as a ‘cold-blooded schemer’.” Knowing now that Young himself has admitted to misusing 1 million dollars of donations, again, the defense has a lot to work with – so much that Dan suggests they might be wary of not “piling it on too much.” As to the part of his testimony where he says he feared for his life one one trip to the woods with Edwards? Dan calls it an “unbelievable exchange…this witness is saying that a presidential candidate” might’ve been trying to kill him – that “he feared there might be a sniper in the woods, who was going to shoot him, in the context of one of their last and worst conversations.” The defense is hoping that’ll make Young look paranoid, untrustworthy, somehow out of touch with reality, and it just may work for them that way. For Dan Abrams and the full discussion, click here.