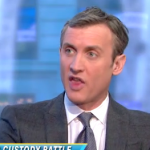 Dan appeared on “Good Morning America” to discuss the consequences of Charlie Sheen’s spate of bizarre behavior, one of which has been a renewal of the protracted custody battle between himself and Brooke Mueller, the mother to his two young sons. Dan appeared with Gloria Allred to discuss the legal implications of Sheen’s meltdown. See the clip here.