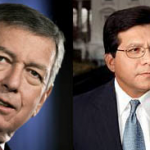 On Mediaite: With former president George W. Bush making the rounds promoting his memoirs, the media is renewing its scrutiny of many of his administration’s policies. Among the most controversial (then and now) are The PATRIOT Act, federal wiretaps and the legality of waterboarding. Dan Abrams sat down in 2009 to talk about those very subjects with John Ashcroft and Alberto Gonzales, who defended the president’s stance on each issue. In light of Bush’s media tour, the interview is worth a second look! To read the full post, click here.