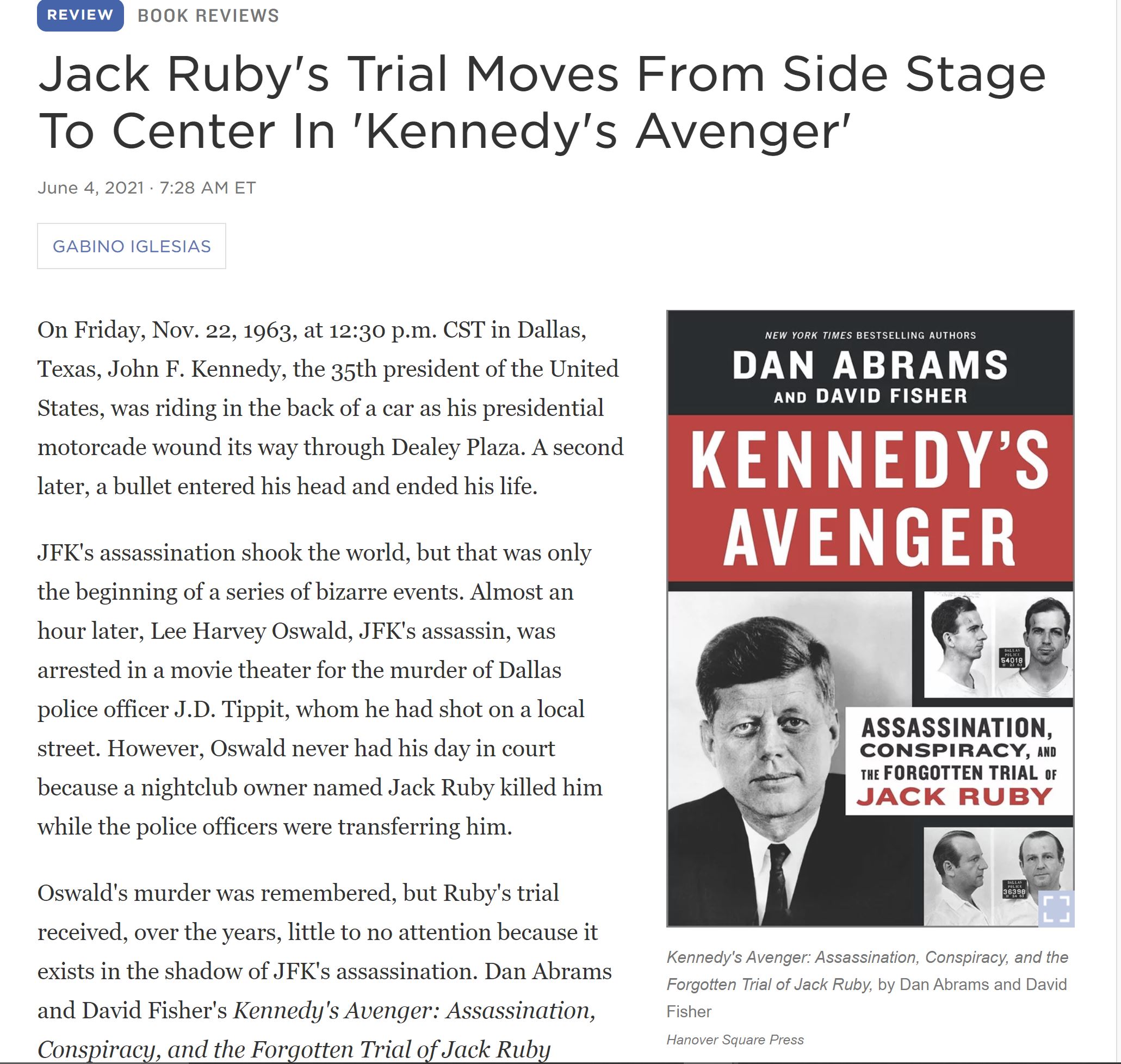 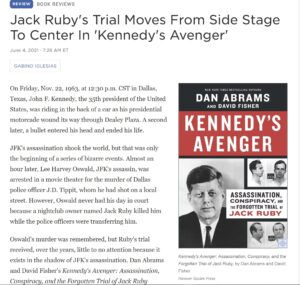 In a review for Dan Abrams and David Fisher’s latest book release, “Kennedy’s Avenger: Assassination, Conspiracy, and The Forgotten Trial of Jack Ruby,” Gabino Iglesias, author and book reviewer for NPR, details what makes the trial of Jack Ruby such an interesting tale and how Abrams and Fisher were able to turn what is often “treated as a historical footnote….into the main attraction.”

“Kennedy’s Avenger” recaps the trial of Jack Ruby, the nightclub owner who shot and killed JFK’s assassin, Lee Harvey Oswald, on live television. Told in what Iglesias calls “a gripping narrative,” the book “picks up the moment Ruby killed Oswald and then methodically unpacks everything that followed.”

“Using newspapers and magazine articles, the transcripts from the case, several biographies and history books,” Abrams and Fisher are able to take a trial that is often overlooked and “bring the case back to life” using “superb attention to detail,” according to Iglesias. Abrams and Fisher “frame the case well,” offering “historical and cultural context” that highlights what made this moment in history so unique. For example, the crime occurred on live television resulting in the use of video evidence in court, a rare occurrence at the time, and a trial with an unusually high number of witnesses. Because the case was so publicized, it also took “14 days and 162 people” for a jury to be selected.

The trial’s connection to Kennedy also led to a mass amount of conspiracy theories which Iglesias notes the authors handled deftly, “showing where they came from and, more importantly, how some of the things that were said in court under oath contributed to these theories.”

“Abrams and Fisher do many things well in this book,” one of which “is highlighting the long list of colorful characters involved in the case,” Iglesias wrote. One of those characters was Melvin Belli, Jack Ruby’s defense attorney who was “known for firing a cannon from atop his building every time he won a case.” The trial also featured unique witnesses such as strip tease dancers from Ruby’s club and world famous boxing champion Barney Ross.

A Washington Post review by Thurston Clarke backs up Iglesias’ take, stating that “Abrams and Fisher adroitly narrate the trial, making the legal maneuvering understandable and fascinating, while offering some well-chosen digressions.” Clarke calls the book “an engrossing, lively and expertly crafted courtroom drama filled with colorful characters and having significant resonance for the present.” Meanwhile, Edward Kosner of the Wall Street Journal called it a “fascinating blend of courtroom drama and legal analysis.”

Despite shooting and killing Lee Harvey Oswald on live television, Jack Ruby died an innocent man in the eyes of the law, and “Kennedy’s Avenger” tells the gripping story of how this occurred. “Clear, straightforward writing and superb research that pays attention to tension as well as humor make this riveting courtroom drama that feels as alive as it did it 1964 — and that reminds readers that there was a second shot heard, and seen, around the world.”