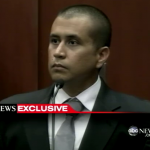 Dan Abrams appeared on World News last night as ABC obtained the exclusive story on new evidence released in the trial against George Zimmerman, charged with the second degree murder of Trayvon Martin. Zimmerman’s defense rested on Wednesday, having argued self defense – that he only shot Martin because he feared for his own life. The details from medical reports could actually support that argument, but only to an extent. “There’s no question these documented injuries help Zimmerman’s case, but the fundamental legal question remains, who was the aggressor?” Dan said. It is the position he has maintained throughout coverage of this trial. The report focuses on Zimmerman’s injuries and condition the day after the altercation, and reveals that Zimmerman “suffered from nausea when thinking about what happened,” and his doctor citing it as imperative that he see a psychologist. Questions remain: Zimmerman declined to go to the hospital the night of the shooting, and the video of him being taken into the Sanford Police Station less than an hour after the shooting shows no visible evidence of his alleged injured state. The medical reports do confirm he sustained a broken nose, two black eyes and gashes on the back of his head, but the legal issues are not resolved by those facts alone. “If Zimmerman started the altercation, starts losing the fight and fears for his life, he does not have a legal right at that point to use deadly force.” These reports do not adequately address the question, if they do at all, of whether or not he was the aggressor. To watch Dan Abrams and the full report, click here.