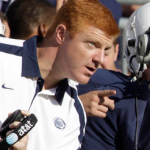 On Mediaite: Mike McQueary has come under fire from all sides for witnessing the alleged rape of a 10-year-old boy by confirmed creep Jerry Sandusky on school grounds and failing to call the police. McQueary has been derided as a coward and an enabler of Sandusky’s continued abuse because of his inaction. Dan Abrams took a rather surprising position on the issue, defending McQueary on Sportsgrid last week. You can read his column here.