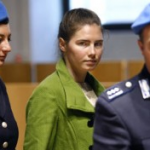 Dan Abrams was all over ABC serving as their chief resource for analysis during the Amanda Knox trial. The network’s extensive coverage followed the last days of the trial, the jury deliberation and Knox’s eventual acquittal of the murder charges. Though Knox was still found guilty of defaming Perugia resident Patrick Lumumba, she was released and allowed to return to the United States. Mediaite covered Dan’s appearances during the trial, which you can watch here and here.