07 May Dan Abrams and Nancy Grace on Missing Massachusetts Toddler 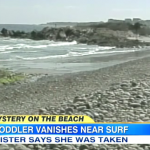 Dan and Nancy appeared together on Good Morning America  today to discuss the case of missing Massachusetts toddler Caleigh Harrison, and the questions that have arisen from this fresh investigation. Did she vanish into the sea? Was she abducted? These are some of the questions that came up, and Dan deferred to Nancy on several points, as she has been closely following the case – she says the story got “murkier” after discussing the events with Caleigh’s family. Apparently, too, Caleigh’s four year-old sister has come out to say that Caleigh was taken by a man, and given specific details and even a drawing of the alleged abductor. This comes as an interesting new twist as no witnesses to date have said anything about seeing Caleigh in the water, and so far no evidence of her has been found there. Dan says that four years old is right at the age where “yes, they are aware, and can be helpful; they provide specifics, but you have to be very careful…as to what the information is and how reliable it can be.” There are three basic possibilities still open at this point: Caleigh was either swept away into the ocean, abducted, or that somehow, her parents are not being totally forthcoming. Watch Dan Abrams and Nancy Grace’s full discussion here.