14 May Dan Abrams and Chris Cuomo on The View 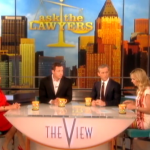 Dan Abrams and Chris Cuomo appeared together this morning on The View to cover several trials that have held the nation’s attention in recent days and even weeks. Opening with what turned out to be the most in-depth coverage – that of John Edwards’ trial – Dan and Chris came out with slightly different viewpoints. Cuomo pointed out that what the Prosecution has really achieved is making people dislike John Edwards. Dan argues that they did more – that they demonstrated beyond a reasonable doubt that Edwards knew about this money, which “they initially said [he] didn’t even know about.” The question remains, still, whether or not they can prove that the cover-up related to the donations in question were merely a means to cover up a personal affair, or used, effectively, in “a move for the sake of the campaign.” Barbara Walters asked if the jury would be able to separate they way they feel about Edwards from what they did, to which Dan and Chris agreed “as long as he doesn’t testify.” Next, the pair helped analyze the media frenzy surrounding John Travolta, and recent allegations of sexual assault and solicitation of sex made by three male masseurs. Dismissing the probability of criminal charges, the two discussed what civil suits are really made of, and what implications there are in this one. They finished with the long-standing issue sparked by Dharun Ravi, who was convicted and sentenced for bullying, essentially, and what purpose it served to society to make an example of Ravi. Both agreed that it was “the wrong case” for such a thing. Watch Dan and Chris in the detailed discussion here.