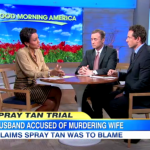 Dan Abrams appeared alongside Chris Cuomo today on Good Morning America to talk about this unusual defense in the trial of a man accused of strangling his wife several years ago. “Never heard a spray tan defense before,” Dan said, while acknowledging that it’s actually a “comparatively strong” one. “The prosecutors basically have a medical examiner come in and say that he believes the victim was choked a year and a half later – but that seems like all they have.” The defense, on the other hand, seems to have quite a bit to work with here, including an enhanced picture of the victim that might reveal something. The defense’s theory is that she had a bad reaction to the spray tanning, and somehow that gets reflected in the picture. Not only that, but the defendant himself is being backed by the victims family – something Cuomo calls “huge” for his case. Dan agrees to say that “on the whole, most cases that go to trial have a lot more evidence than this one.” Watch Abrams and Cuomo have their full discussion here.