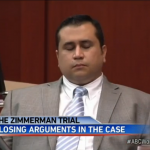 Yesterday, the closing argument from the prosecution was presented in the Zimmerman Trial, as they concluded attempting to prove that Zimmerman is guilty of the murder of Trayvon Martin.  Zimmerman, usually stoic, gave a silent reaction.  Dan appeared on ABC World News to discuss whether George Zimmerman should be worried about the decision in this case.  Dan says, “He should absolutely be worried.  It’s still an uphill battle for prosecutors, but this was still a very effective closing argument, focusing on an issue that we discussed last night, which is the human aspect, the emotional aspect, the notion that this is a 17-year-old kid who didn’t need to die.  And it is possible that jurors will simply look at that issue alone and say that the letter of the law is one thing but the practical reality is another, and this is a kid who shouldn’t be dead.”  Watch the full episode here.