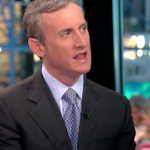 After a protracted trail that included quite a bit of disturbing testimony from sources close to Michael Jackson, as well as some terrible photographs of the late singer after his death, Conrad Murray was found guilty on trial for the wrongful death of Jackson. Though many people assumed Murray was guilty from the outset, his conviction was never a certainty. Dan Abrams discussed the verdict on “Good Morning America,” which you can see here.