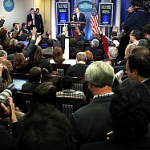 From Mediaite: How many journalists have become part of President Obama’s staff? Mediaite reports, “The news that Time magazine editor Richard Stengel is leaving his post to become the undersecretary of state for public diplomacy and public affairs prompted Atlantic Wire reporter Elspeth Reeve to examine how many reporters had left their jobs for positions in President Barack Obama’s administration. It turns out that quite a few journalists have found second careers working for the president. ‘But it is the latest example in a growing trend of the White House reaching out to hire journalists. According to one count, at least 15 journalists have joined the Obama administration since 2009,’ writes The Daily Beast’s Ben Jacobs.” Read on here. 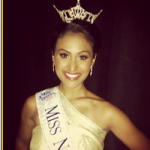 From Gossip Cop: Is there trouble in pageant paradise? Gossip Cop writes, “Miss New York Nina Davuluri has been accused of calling outgoing Miss America Mallory Hagan ‘fat as f**k’ — just two days before the Miss America 2014 pageant on September 15. The New York Post reports that Davuluri — who has nicknamed herself “Miss Diversity” — was allegedly tape recorded blasting Hagan at a Staten Island hotel after she was crowned Miss New York on July 16. The paper claims a fellow beauty queen overheard Davuluri slamming Hagan to pals, and captured her on tape saying, ‘Mallory’s fat as f**k.’ Davuluri denied insulting Hagan on Facebook, writing, ‘I want to apologize for the awful statements made by people in my room… I was never a part of the words or statements that may have been hurtful.’A rep for the Miss America pageant said, The situation was investigated fully back in July and there is no validity to the story whatsoever.'” Read the story here. 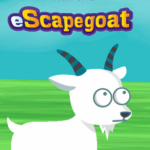 From Geekosystem: Yom Kippur? There’s an app for that. Geekosystem explains, “Did you guys know that the word “scapegoat” comes from the ancient Hebrew tradition of transferring your sins to a goat and then sacrificing it as an offering during the Day of Atonement? That’s probably illegal now, so if you want to celebrate Yom Kippur right, you should probably transfer your sins to this fictional Internet goat instead. Created by the crew at G-dcast, a media company devoted to “raising basic Jewish literacy,” the eScapegoat is a way to anonymously admit to wrongdoing. So it’s sort of like Postsecret only you don’t have to exert as much effort, and if you’re a religious type of person you can feel a little better about yourself after confessing a sin.” Read more about it here. 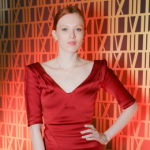 From Styleite: The style site is interviewing a style icon, Karen Elson, today. Writes Styleite, “Karen Elson might be a bit of a bohemian, but she enjoys dripping in diamonds just as much as the next girl. In fact, when it comes to accoutrements, she admires none-other-than Elizabeth Taylor, the queen of over-the-top jewels. We caught up with Elson at the storied Tiffany & Co. flagship on Fifth Avenue — you know that place where Holly Golightly would breakfast from time to time — as the crimson haired supermodel hosted a fashion week fête for the brand’s new Atlas Jewelry Collection. Being that she’s the face of the campaign, she told us what she loves most about the roman numeral motif collection, as well as why she admires Taylor’s colossal jewelry collection. ” Read the interview here. 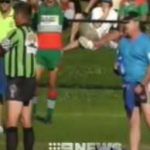 From SportsGrid: Well, here’s a sports suspension you don’t hear every day: writes SportsGrid, “Anthony Watts, who has had several past run-ins with the law, and has reputed ties to an outlaw biker gang — has been suspended for eight games by the Queensland Rugby League for biting an opponent in the penis. So, penis biting is eight games, is it? (Consults rule book). My favorite quote from the video: ‘The alleged bite happened right on half time.’ Watts is a former National Rugby League player (Australia’s top rugby division), where he played for the Sydney Roosters. The Guardian: ‘The ex-Sydney Rooster and North Queensland player was accused of biting a rival player during the Tugun Seahawks’ preliminary final win over Bilambil Jets on 1 September.” Read on and watch the video here. 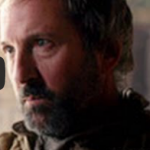 From The Mary Sue: Today, the girl geek site has an exclusive clip from this weekend’s episode of ‘The White Queen.’ Writes the site, “Starz has provided us with another sneak peek at the latest episode of The White Queen. In episode five, airing tomorrow at 9pm ET/PT, Lord Stafford raises an army and Margaret Beaufort is shocked to find out what her husband will be using his resources for. It’s safe to say there might be some family tension on the rise.” See the clip here – and also check another exclusive: “DC Comics’ Villains Month continues with the Amazon Princess! They’ve given us an exclusive preview of the Wonder Woman issue focusing on Cheetah, which also gives series regulars Brian Azzarello and Cliff Chiang a rest.” 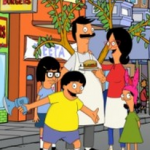 From The Jane Dough: There are some exciting guest stars coming to Bob’s Burgers soon, and some of them are The Jane Dough’s favorite funny ladies! Writes the site, “We weren’t joking when we said that Molly Shannon is everywhere: FOX recently announced the stellar voices that will be guest appearing on its animated lineup and guess who showed up on the list! Shannon has been tapped for an episode of Bob’s Burgers in which she will voice one of Louise’s classmates. Another SNL alum, Rachel Dratch, will appear on the series, although there has been no word on who she will play. A love interest for Gene? Tina’s new BFF? There are so many possibilities! Joining the two are Will Forte, who will play a seaplane captain; Jordan Peele, who will voice a football player turned Bob’s Burgers spokesperson; Kathryn Hahn; Bobcat Goldthwait; and Matt Walsh. Coming back for a second round of Belcher hijinks are Megan Mullally (we love you, girl!), Jenny Slate (we love you too, girl!), Tim Meadows, Gary Cole, Ken Jeong, and Aziz Ansari.” Read on here. 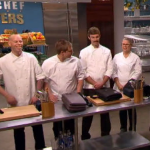 From The Braiser: Keeping you up-to-date on all your foodie TV, The Braiser writes, “On this week’s Battle of the Sous Chefs, the sous were given ten minutes to brainstorm with their head chefs on a dish that would ultimately secure one pair’s spot in the Season Finale. By winning this challenge, the triumphant duo would receive immunity in next week’s Top 4 competition, thereby guaranteeing them a spot in the Top 3. Which sous did their bosses proud and which elicited the following response from Hugh Acheson: “I’m scared but I am going to try it, because I love you’?” Find out here.