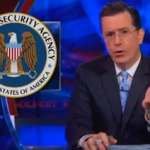 From Mediaite:  NSA’s PRISM only targets foreigners and those conducting relations outside of the United States.  Mediaite reports “In a Paul McCartney-shortened segment Wednesday night, Stephen Colbert sent up the NSA’s expansive surveillance programs, saying, ‘Millions of Americans whose privacy has been invaded were shocked to learn that anything on the internet was ever private.’  ‘Now, I have to admit, at first I found this program to be a shocking breach of the public trust,’ Colbert said of PRISM.  ‘The intimate details I share from my Gmail account are no business of big government. They are for one purpose only: so I can get targeted ads for boner pills.’  ‘But then I learned that PRISM targets only foreigners!’  Colbert put up a photo of the Statue of Liberty. ‘Evidently that torch of freedom is only for Americans. For the rest of the world, she’s holding a boom mic.'”  Read on here. 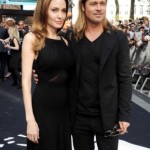 From Gossip Cop:  Jolie isn’t as controlling as they make her out to be.  Explains Gossip Cop,”‘The guest list to Brad Pitt and Angelina Jolie’s upcoming wedding just got shorter by three,” claims the National Enquirer, which reports that Jolie said ‘no way’ to Pitt’s pals Quentin Tarantino, Jonah Hill, and Philip Seymour Hoffman.  Why?  A so-called ‘insider’ tells the tabloid, ‘Angie wants her wedding to be perfect, and that applies to the guest list as much as anything else. She respects Brad’s right to be friends with whoever he wants, but there’s no way she’s allowing any of these guys to attend their wedding.’  Point in case: The magazine previously — and wrongly — reported that Pitt and Jolie were going to get married in Russia.  In the new report, the nuptials will supposedly happen in September in France.  And we’re supposed to believe that the Enquirer has intimate knowledge of the guest list?”  Read on here. 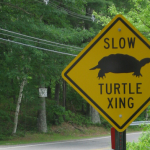 From Geekosystem:  Bad things don’t always happen to bad people.  Sometimes, bad things happen to good people.  Geekosystem reports, “In a show of perverse irony handed down to us from the Universe, a 70-year-old man in Waukesha County, Wisconsin was attempting to assist a local turtle in distress when he accidentally stepped in front of a school bus and was struck, sustaining non-life threatening injuries and traumatizing a whole bunch of children. Not the turtle, though, of course. She got away just fine. So at least it’s an only mildly disastrous story instead of a nihilistically tragic one. Hooray?  The man picked the turtle up and intended to walk with it across Highway 59, but neglected to actually look before he stepped out into road and ‘didn’t see the bus coming,’ according to local news sources.”  Read on here. 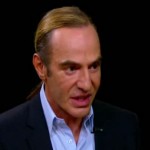 From Styleite:  The first ever John Galliano TV interview, post-scandal, with Charlie Rose, aired last night on PBS.  Reports Styleite, “In the interview, Galliano looks far from the performer we’re used to seeing on the runway, dressed in a navy suit and blue button up that’s neither slashed into a deep-v, nor fringed with pirate lace, as he expounds on the Vanity Fair interview he gave earlier this month.  In a very solemn tone Galliano reiterates that he takes full responsibility for that now-infamous outburst: ‘I apologize and I am trying to make amends, in the best way that I can.’  Rose then brings up the suicide of Alexander McQueen, and with a lot of pausing Galliano says he has many times felt that same anguish. ‘I knew Alexander – I knew Lee. I understood. That loneliness, that pain… You’re only as good as your last collection, which is an enormous pressure.'”  Read on here. 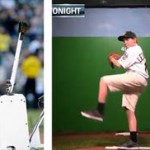 From SportsGrid:  Thirteen-year-old, Nick LeGrande made a historic pitch fromm Kansas City to Oakland.  SportsGrid explains, “LeGrande, who lives in Kansas City, threw what is believed to be the first telerobotic pitch in an MLB stadium on Wednesday night — winding up and throwing a baseball in Kansas City, which was simultaneously tossed by a robot at the O.co Coliseum in Oakland. The robot copied Nick’s pitching motion via sensors, completing a 1,800-mile ceremonial first pitch.  And up until about two hours before he threw it, it was a complete surprise to Nick. He was told he was going to visit his grandmother, but they drove him instead to the Google offices in Kansas City, where a mini-baseball stadium had been set up for him.”  Watch the clip here. 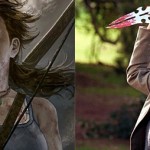 From The Mary Sue:  Marti Noxon of Buffy the Vampire Slayer has signed on to rewrite the script for the Tomb Raider movie.  The Mary Sue‘s Rebecca Pahle reports: “Last we heard of the new Tomb Raider movie there was no talent attached, either on the cast or crew end, but production company GK Films’ partnership with MGM raised our hopes that the film might not languish in development hell for too long. Now it looks like our hopes have been confirmed, as Marti Noxon, a writer/producer with an extensive list of credits but who will always be associated with Buffy the Vampire Slayer in our hearts, has signed on to rewrite the script.  What we know about the film from producer Graham King is that it will be ‘the story before she became Lara Croft’ and as such will be less tied in with the previous two movies than with the recent video game reboot.”  Read on here. 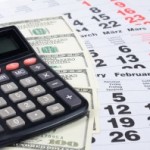 From The Jane Dough:  It’s all about doing what you love.  The Jane Dough explains by the story of Ainslie Simmonds:  “In 2009, I was a very senior executive celebrating my fourth anniversary at a brokerage firm. I was working about 70 hours a week, managing 80 people and traveling to the company’s other offices (two of which were cross-country) 3-4 days a week, twice a month. Even when I wasn’t at the office or on the road, my Blackberry was constantly lighting up on nights and weekends. I would estimate I got about 400 emails a day.  But with three children under 10, I knew that years of working at a blistering pace was taking a toll on our family, and I needed to make a change. I set out to find something a little less intense and found a great consulting role in marketing and product development with a small firm.  In fact, it was a big reduction: $5,000 a month, plus the substantial bonuses I would no longer receive.”  Read on here. 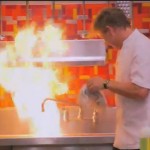 From The Braiser:  Spoiler alert!  Someone loses an eyebrow on tonight’s Hell’s Kitchen.  Could that someone be Gordon Ramsay?  The Braiser‘s Mariella Mosthof writes, “Oh, sure, cooking competitions are all fun and games, until a flameball flies out of a pan, hits you in the face, and singes all your sexy Scottish facial hair off.  Gordon Ramsay learns this the hard way, when he tries to take over the two flailing teams on tonight’s Hell’s Kitchen.  Both have pans catch fire on the stove, and Gordon rushes to put them out, potentially losing an eyebrow along the way.  Check out a demo on kitchen fire safety below and tune into Hell’s Kitchen tonight at 8:00 PM ET.”  Read the sneak peak on here.