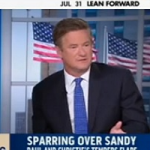 From Mediaite: Joe Scarborough insulted Chris Christie this morning, but in the nicest way possible. Explains Mediaite, “Governor Chris Christie (R-NJ) and Senator Rand Paul (RW-NJ) have been locked in oral combat for several days now, with Sen. Paul going all 1920s on Christie’s ‘Hogwash,’ and Gov. Christie telling Paul to go get his f*ckin’ pork box, and Paul responding ‘I know you are, but what am I?’ Morning Joe host Joe Scarborough took Christie’s side Wednesday morning by, of course, comparing him to a pig. Maybe Joe is angling for honorary New Jersey citizenship.” Read more about what happened here. 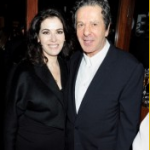 From Gossip Cop: The Nigella Lawson divorce story continues: “Nigella Lawson and Charles Saatchi are on their way to a quick divorce. On Wednesday, London’s High Court granted the estranged couple a decree nisi — a preliminary divorce judgment. In six weeks, Lawson and Saatchi can seek a decree absolute, which would finalize the legal split. Neither party was in court for the hearing. Although Saatchi announced his intentions to divorceLawson earlier this month, it was actually the celebrity chef who officially filed to end the marriage. In paperwork dated July 10, “The Taste” judge seeks the divorce based on her husband’s “unreasonable behavior.” The pair’s split comes 10 years after they wed, and a month and a half Saatchi was photographed choking Lawson at a restaurant. He initially downplayed the incident, but later admitted to the assault.” Read the story here. 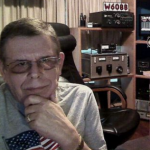 From Geekosystem: Art Bell is headed back to the radio. Geekosystem explains, “It’s been rumored for some time, but today brings confirmation that Art Bell, founder and long time host of Coast to Coast and the resounding voice of late night radio weirdness to a generation is returning to the air with a new show, Art Bell’s Dark Matter on Sirius XM. Fans of pseudoscience and general weirdness couldn’t ask for better news. For years, Bell’s show was a bastion of  weirdness like one could only hope to find on late night radio. Four hours of programming broadcast live in the wee hours of every weekday morning provided listeners with one-stop shopping for interviews with psychics, time travelers, conspiracy nuts and Area 51 experts, among a staggering multitude of cranks, crackpots, and crazies of all stripes — and that was just the guests.” Read more here. 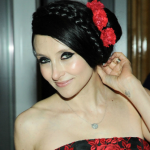 From Styleite: Eliot Spitzer has been in the news recently… but for his socks? Styleite reports: “On any given day Stacey Bendet makes a fashion statement, whether it be going to dinner in a ball gown on a weeknight or sporting a flower crown before 9:00 AM, but now she’s making her foray into political commentary by going after Eliot Spitzer and his atrocious sexy time socks. Bendet sent out an email blast yesterday which, according to The New York Post, read: ‘I encourage you all to support Scott [Stringer] . . . 1. because he’s amazing and will be a great comptroller, 2. because his opponent has [sex] wearing dirty socks with prostitutes (I care more about the socks than the prostitutes).’ In case you’re not privy to the situation, it was alleged that Spitzer kept black stocking socks on during his romps with high-priced call girls. It seems one politco’s sexting vice, is another man’s unsexy sock fetish. But crimes of fashion aside, Bendet has other motives for backing Stringer.” Read the piece here. 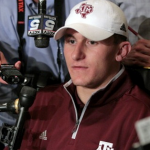 From SportsGrid: Johnny Football can’t get his name out of the news, and today SportsGrid’s Zach Berger shares his opinion on it: “Tebowmania, in its most monstrous form, is a thing of the past. But it has been replaced by Manzielmania, which is ten times the monster that the media’s Tebow coverage ever was. What was once constant raving about one player has turned into a crucifixion of Johnny Football for reasons unbeknownst to me. Sports media likes to pick one player and talk about them non-stop for an extended period of time before moving on to the next guy. That isn’t an issue when they’re in love with the player like they were with Tebow. It’s a bit of a bore and a nuisance, but it brings in viewers and readers and that’s perfectly understandable. But when that enthusing is replaced by unwarranted, unjustified, and persistent criticism, most of which stems from Johnny Manziel being a typical college kid, a problem begins to arise.” Read more here. 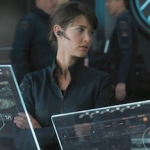 From The Mary Sue: Today, The Mary Sue asks an important question: what’s next for the women of the Marvel cinematic universe? Writes the site’s Susana Polo, “Maria Hill is a character to watch in the Marvel Cinematic Universe. After all, her immediate superiors are either officially dead or just royally pissed off the board of shadowy figures that apparently has enough power to allow American government employees to make in-no-way-covert strikes on German soil and not cause an international incident. But what does Cobie Smulders, once Joss Whedon‘s pick for Wonder Woman, have to say about her future in the MCU? Crave Online talked to her and Kat Dennings (Thor‘s Darcy) about a number of the MCU’s female characters and what Winter Soldier, The Dark World,Agents of SHIELD, and even Age of Ultron.” Read what they had to say here. 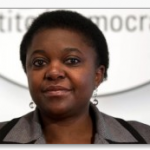 From The Jane Dough: A sad occurrence in Italy, reports The Jane Dough: “At a Democratic Party rally in Cervia on Friday, Italy’s new integration minister Cécile Kyenge was the target of a racial attack. While Kyenge was delivering a speech, an unknown spectator lobbed bananas towards the stage, narrowly missing it and the politician. Kyenge is no stranger to racially-charged threats and hostility: born in the Democratic Republic of Congo and naturalized as an Italian citizen, the integration minister has drawn the ire of extremists and anti-immigration zealots both for her politics and her race… Since taking office in April, Kyenge has been targeted for her plans to reform immigration laws and grant citizenship to all persons born on Italian soil.” Read more about it here. 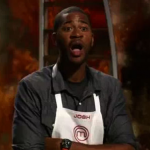 From The Braiser: There’s some interesting news about MasterChef today. Writes The Braiser, “Last season’s MasterChef runner-up Josh Marks had all the makings of an elegant restaurant chef, with pretty remarkable finesse for a home cook, but he ultimately lost out to the competition’s first blind contestant Christine Ha, whose specialty was more rustic Asian comfort dishes. Many fans of the show thought he was slighted for the warm and fuzzy production value of a blind contestant winning the show, but it looks like he took the loss a wee bit hard. Josh was arrested on the University of Chicago campus on Monday, after he was spotted by police trying to use a University emergency phone with cuts to his face. An officer approached asking if everything was okay, and that’s when Josh lunged at him, throwing punches, and grabbing for his gun.” Read more here.