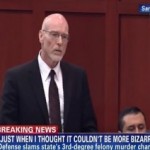 From Mediaite:  In the Zimmerman Trial, the prosecution introduced a new, lesser charge that they would like the jury to consider: third-degree murder in the event of child abuse.  Reports Mediaite, “Don West, attorney for George Zimmerman defending him against charges of second degree murder for the 2012 killing of Trayvon Martin, lashed out at the prosecution for introducing new charges to the jury including third degree murder based on child abuse.  West objected to the introduction of this charge without allowing the defense proper time to prepare. He called it an ‘outrage’ and asked if the judge understood that the prosecution was trying to ‘trick’ the court.  ‘This is outrageous,’ West said. He asked Judge Debra Nelson to recess the court for a number of hours in order to allow the defense to prepare for the change in charges the jury will be allowed to consider.”  Read on here. 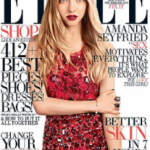 From Gossip Cop:  Amanda Seyfried talks to Elle in the August issue about past and future loves, as well as her new movie role as an infamous porn star.  Reports Gossip Cop, “Talking about her prerequisites for a relationship, the actress shares, ‘Everybody I’ve dated I’ve been sexually attracted to immediately.’  Seyfried elaborates, ‘Sparks don’t grow — your vagina doesn’t become more inclined to wanting someone just because you’re around them.’  On the subject of attraction, the star also addresses her status with ex-boyfriend Dominic Cooper, saying they still ‘love each other’ and remain connected.  ‘He’ll always be in my life regardless of what his girlfriends or future wife think,’ proclaims Seyfried, promising that she is ‘never going to be with a guy that can’t deal with my friendship with him.'”  Read on here. 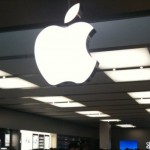 From Geekosystem:  During construction of their Madrid Apple store, Apple ran into the ruins of a 15th-century hospital.  Not much of a surprise for Apple, as they were expecting to run into ruins as they had planned for this to happen..  Geekosystem explains, “Apple is currently building their fourth store in the city of Madrid, Spain, but they’ve hit a small snag. During construction, they unearthed some ruins of a 15th-century hospital. Fun fact: They were actually expecting to hit some 15th-century ruins. We guess it happens a lot.  It sounds like it would be harder to dig in Madrid and not find any ruins.  When Apple was granted the permit to renovate the building, it was no secret that they would probably come across ruins, since ruins had already been discovered during the construction of a nearby rail station back in 2009. This is because Madrid, it turns out, is lousy with ruins. Just ruins all over the place.”  Read on here. 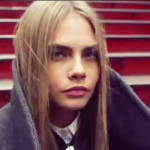 From Styleite:  Cara Delevingne stars in DKNY’s Fall 2013 campaign.  Styleite writes: “What does a cocktail of Cara Delevingne, dubstep, and NYC, give you other than a party? Short answer: The DKNY Fall 2013 campaign. Naturally, we weren’t surprised to see that Donna Karan tapped the Brit model considering the she’s been in just about every campaign we’ve seen so far, and she closed DKNY’s fall show set to one very bass-heavy Frank Sinatra and Biggie mash-up back in February.  In the video, which is set to an equally booming, custom-made dubstep track, the prominent-browed 20-year-old hits the mean city streets and makes a Time Square jaunt look like something other than our worst nightmare.”  Read on here. 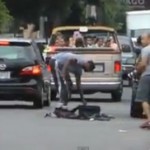 From SportsGrid:  LamLam isn’t as sweet with the paparazzi as he is with his fans.  Writes SportsGrid, “Here’s a lesson that the paparazzi might want to take to heart: Lamar Odom seems to have no problem with people asking politely for a photo and taking one with him. It’s when you stalk him around town and treat him like an animal in the zoo that he gets testy.  Without context, this video of Odom going into a paparazzo’s car and throwing his stuff into the street is perplexing. What made the NBA free agent so mad that he could be charged with vandalism today? No clue. That’s not even the worst of his tantrum, however:  ‘He then walked across the street and smashed another photog’s car with a metal bar, then picked up all the gear from the street and put it in his trunk.'”  Read on here. 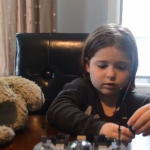 From The Mary Sue:  Six-year-old Riley seems to make a lot of mature sense.  Explains The Mary Sue, “Hey, everyone…Riley seems angry. Should we be concerned she’ll Hulk-out? Perhaps. She takes issue with the lack of Black Widow action figures spinning out of Joss Whedon’s The Avengers. And with good reason! That’s straight up…well, you know what, I’m not going to curse in a post about this adorable little girl speaking her mind about sexism. I will, however, say if I had a daughter, I’m pretty sure this is what she’d sound like. YOU GUYS, it’s like Black Widow doesn’t even EXIST!  But here’s the good news, Riley, a Black Widow Avengers action figure DOES exist. I’ve just never seen one in an actual store.”  Read on here. 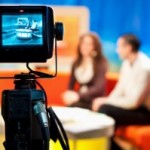 From The Jane Dough:  Texas recently proposed abortion restrictions, and everyone who’s anyone has been talked to about it…  except women’s health experts.  The Jane Dough writes: “Cable news stations have been incessantly covering Texas’ proposed abortion restrictions and subsequent protests for weeks now and have brought a number of commentators to shed light on the issue; however, a really important group — probably THE most important group— is ‘noticeably absent’ from those invited to speak on-air, according to a new analysis from Media Matters. Of the 92 people invited to speak on-air, only four commentators have been women’s health experts.  Cable news shows have instead opted to feature political pundits who aren’t actually physicians or reproductive health experts. Fox News hosted no women’s health experts, while CNN and MSNBC hosted two and three, respectively.”  Read on here. 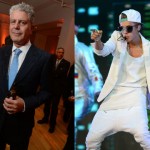 From The Braiser:  Anthony Bourdain slams Justin Bieber on Twitter after a video of Justin peeing into a club kitchen mop bucket surfaced.  The Braiser reports, “Uh, we don’t know if you knew, but Justin Bieber was videotaped being ‘an oblivious, self-important little twit’ in the wee hours of this morning, relieving himself in a restaurant’s kitchen mop bucket instead of in the bathroom, like normal people, because he was raised by Usher. This is what happens when you’re raised by Usher. (No offense to Usher intended.)  Of all people, perhaps because he senses the impending obsessive tweendom about to befall his little angel, Anthony Bourdain took to Twitter to expel his Bieber aggression on the record.”  Read on here.