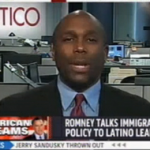 From Mediaite:  Politico White House correspondant Joe Williams had some thoughts on Mitt Romney and his ability to relate to the American people, and they weren’t exactly welcome. Reports Mediaite, “On Friday morning, Poynter reports that Politico has suspended its veteran White House correspondent Joe Williams for racially-tinged remarks he made on Martin Bashir‘s MSNBC program Thursday afternoon. Williams’ ‘comment about Governor Romney earlier today on MSNBC fell short of our standards for fairness and judgment in an especially unfortunate way,; Politico editors John Harris and Jim VandeHei wrote in a memo to Politico staff yesterday. The remarks in question where said in response to a discussion on presumptive Republican nominee Mitt Romney’s seeming inability to connect with minority voters.” Read his statements and watch the clip here. 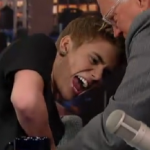 From Gossip Cop: Justin Bieber has been all over the late night scene recently, and has been getting into fights. In appearances on Late Night with Jimmy Fallon and The Late Show with David Letterman, he dueled with the hosts – jokingly. Reports Gossip Cop of his Fallon experience, “The Biebs got into it – really into it – with Jimmy Fallon in a sketch featured on Thursday’s ‘Late Night.’ After Fallon realizes they both have new albums to promote — and that Bieber will most definitely outsell him by, well, a lot— he challenges the singer to a series of activities to determine who really is the ‘more awesome’ star. Needless to say, many hijinks ensue.” And on Letterman? A scuffle over Biebs’ new tattoo: “The Biebs, who already has a number of tattoos including an image of Jesus, showed off his latest ink: the word ‘Believe’ (the name of his new album) on his left arm. With the tone of a disapproving father (or ‘grandpa,’ as Bieber said), Letterman warned the 18-year-old he’ll soon start to look like the Sistine Chapel if he keeps up the body art.The two briefly (jokingly) scuffled when Letterman grabbed Bieber’s arm to examine the tat.” Watch the videos here and here, respectively. 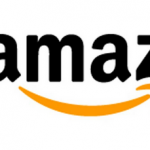 From Geekosystem: There’s currently an internet land-grab party happening, and Amazon’s RSVP’ing “yes” in a big way. The site is among several major players attempting to snatch up as many .com alternatives as they can afford. Reports Geekosystem, “Internet megastore, and survivor of the early web days, Amazon is now after 76 domains, including .amazon, .kindle, and .joy. For those unaware, the Internet Corporation for Assigned Names and Numbers basically controls how things are named on the Internet. Recently, ICANN made the controversial move to open up top-level domains — that is, anything to the right of the “.”, like “.com” — to pretty much whatever people were willing to pay for… The only catch is that applicants first have to be willing to shell out $185,000 up front and$25,000 a year to maintain their claim. Also, and this is where things get interesting, applicants must defend their domain claims in cases where they overlap with other claims. You can bet that there is going to be a lot of wheeling and dealing going on behind closed doors. Amazon’s 76 applications may not be the biggest of the bunch (Google has about 101, among them “.LOL”) but it does represent a significant investment on the part of the company.” Read more here. 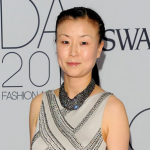 From Styleite:  Designer Doo-Ri Chung is leaving her namesake label. She has had the line for nine years. It is reported that Tharanco Group, owner of the Doo.Ri brand, is “looking into new strategies for the brand,” leading to speculation that the label will be sold or broken up via a licensing model. Reports Styleite, ” While the reason for Chung’s departure is unclear, it’s safe to say it’s not a reflection of Chung’s work. The designer was featured in Douglas Keeve‘s documentary Seamless, has several CFDA accolades under her belt, dressed Michelle Obama for a state dinner, and has collaborated with Macy’s. So yeah, she kicked ass at her job, and this exit seems sudden and unexpected. Also, this feels quite similar to the situation with Simon Spurr earlier this year. Spurr left his own label (and his company is continuing to use his name), but details remain murky. Will this happen to Chung as well?” Read the full article here. 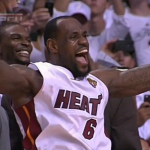 From SportsGrid: Well, the Miami Heat won the NBA championship last night in Game 5 against the Oklahoma City Thunder, 121-106. Reports Sportsgrid, “Though the team as we know it now only came together last year, it seems like this was a long, long time coming… the drama of this team has captivated sports fans and media outlets, haters and frontrunners, and pop culture as a whole. Well, two seasons after the biggest Big 3 of them all came together — and, more importantly, after nine seasons of shortcomings for LeBron ‘The King’ James — this team and these players have their title. This is the first ring for many players, sure — Chris Bosh, Mike Miller, Shane Battier, et al. But it’s all about LeBron. The monkey on his back since he entered the league as a standout high schooler — the same monkey that chased him from Cleveland, made him a pariah and a villain, but kept him working and dreaming and playing outstanding, MVP-caliber basketball, has finally been… sent back to the zoo. Or however that analogy normally ends. It’s a well-deserved championship for a man who — love him, hate him — will become one of the greatest to ever play the game.” One down, seven to go, LeBron. Read more and watch the final buzzer here. 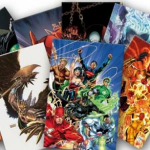 From The Mary Sue: Make your voice heard, fangirls! Take DC Comics’ second Nielsen Survey to share your opinions on comics and shape your future of reading them. Reports The Mary Sue, ” Have you been reading DC Comics’ new title, Orange Ivy? No? That’s because it doesn’t exist. It’s the new fake title introduced in a second Nielsen Survey the company has put out to gauge readership of their New 52 books. (You may remember us reporting on the first one last September.) Read on to find out how to take the survey and what, if anything, it could mean for your future buying habits.  We were interested to hear the results of DC’s last Nielsen survey since there was a big push online (specifically at women-friendly websites like ours) to get as many people as possible to respond. There were things we weren’t happy with in our comics and we hoped giving our opinion would help form the company’s opinion on how to get more women to read their books. So what were the results? As we previously told you, the New 52 galvanized the traditional fanbase, appealed mainly to hardcore fans, lapsed readers, and adults, and just 5% of respondents were new readers. Not exactly what they hoped to hear. They also admitted in their report that the survey was not a reflection of all comic book readers. It was also done just one month after the relaunch.” Read more here. 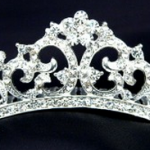 From The Jane Dough: Well, this is just sad. And confirms the sad state of airports and air travel today. Reports The Jane Dough, “The British Airports Authority (BAA) discovered Duchess Argyll of Scotland’s tiara in the Glasgow Airport lost and found a couple years back, and rather than execute their due diligence and try to find the owner, they sold it. The Duchess, who had reported the crown as well as three other items missing to the Art Loss Register (ALR) in 2006, believed her things were gone for good until she stumbled upon her MIA Cartier brooch in a catalogue of Scottish auction Lyon & Turnbull (L&T) this year. Though the authority has offered to reimburse the diamond merchant so the shiny crown and brooch can be given back to the Duchess, her pearl earrings and emerald ring are still nowhere in sight. Awesome. The Telegraph reports that the ALR’s lawyer investigated and found the jewelry months after its loss, but BAA did not contact police about the matter. They merely sold it to a diamond merchant for less than a fraction of its worth and donated the proceeds to charity, the protocol for lost items that go unclaimed for three months.” Read the full article here. 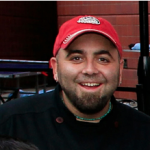 From The Braiser: Good news for Ace of Cakesfans! You can now channel your best inner Duff Goldman by decorating a cake in one of his new shops, called Cakemix. Reports The Braiser, “Goldman and crew have launched Cakemix, a decorate-your-own-cake store where you can use all sorts of fondant sculptures and airbrushed cake graffiti and piping bags to make your own fancy cakes starting at $36 (or four cupcakes for $18, they don’t discriminate).  Customers can also take pre-decorated cakes home, or buy a ‘to-go’ kit to Ace all their Cakes at home… Cakemix opened its first location in Los Angeles yesterday, but Goldman hopes to eventually have two dozen locations in the United States, as well as one in Tokyo. Goldman also has a Cakemix food truck that’s available for parties, because in LA, a truck is a sign that you’ve Arrived as a chef.” Read the whole story here.