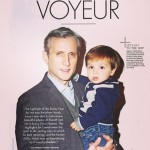 Dan along with girlfriend, Florinka and their son Everett enjoyed the 23rd Annual Bunny Hop on March 7, 2014. This event was hosted by The Associates Committee of The Society of Memorial Sloan Kettering Cancer Center. The Annual Bunny Hop, sponsored by Gucci with additional support from Warburg Realty, is one of the most noteworthy family events of the year. The event itself raised over $300,000 this year, benefiting Memorial Sloan Kettering Cancer Center’s Pediatric Department. The event took place at 583 Park Avenue where the room was transformed to delight the children as well as their parents. Attractions included a live animal show and petting zoo, strolling performers, Gucci photo booths, a DJ, spin art, magicians, balloon artists, Bubblemania, The Human Slinky and much more. As a special treat due to the longstanding partnership with The Big Apple Circus, all were entertained by the Big Apple Circus Clown Care Doctors and Ty Tojo, world famous juggler from the current circus tour. Dan and his son Everett were featured in Manhattan Magazine giving a quote on the event, “The highlight of the Bunny Hop for me was the photo booth, since I was able to take home beautiful photos of Everett and me in fancy Gucci frames. The highlights for Everett were the goat in the petting zoo, to which he kept returning and the human slinky, which was as hypnotizing as it was psychedelic.”