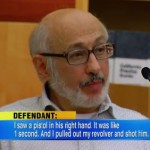 Dan appeared on Good Morning America, Monday, June 16th to discuss the case of a man from California who is on trial for killing one of his neighbors over a dispute about their yards. Michael Vilkin, on trial for first-degree murder, is claiming self-defense, however, the man he killed was unarmed. While on the stand Vilkin claims he saw his neighbor, John Upton, holding a pistol, which he says, prompted him to shoot Upton with his .44 Magnum. Vilkin called Upton a bully, but prosecutors say that Vilkin went out that day with blood on his mind. Says Dan, “This is not a particularly strong self defense case, you’ve got an eyewitness who contradicts the testimony of the defendant and you’ve got no one else really backing up his account, other than his own testimony. With that said, remember, the prosecution, even in a self-defense case in California, has the burden to prove, in effect, that it wasn’t self-defense. Key elements of self-defense, was it reasonable to believe that? And was it necessary to do what he did? And, you know, I think that that’s a tough argument for him to make. The prosecutors have the burden.”  Watch the full clip here.